The two developments surrounding Olde Mecklenburg Brewery (second pink building from left) will include a mix of housing, including apartments, townhomes and age-restricted. /Town of Cornelius 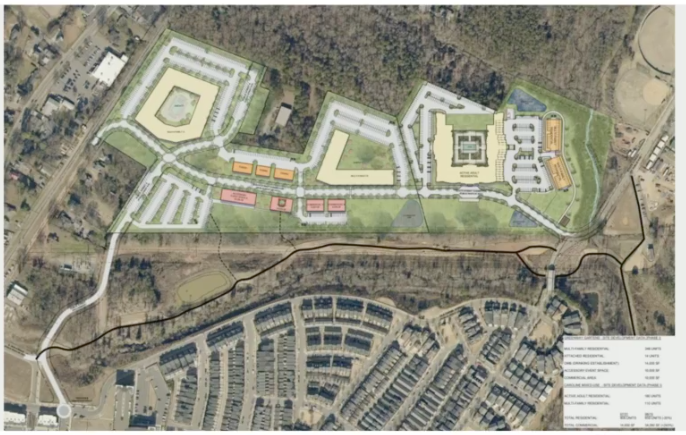 CORNELIUS – Moving forward with Cornelius’ vision of a vibrant downtown area, the two adjoining developments associated with The Olde Mecklenburg Brewery were unanimously approved by the town board Sept. 7.

A nearly four-hour public hearing featured residents and business owners both opposing – mainly for traffic concerns and tree preservation – and supporting the projects. Plenty of concessions were made by the developers, which were applauded by town commissioners. There were two commercial buildings eliminated from the Caroline end closest to the South Street covered bridge, and an additional road is to be constructed to serve as an alternative to Zion and connecting into Antiquity.

“Traffic is our town’s number one concern,” said Commissioner Mike Miltich. “This project provides an identified needed connector from Catawba to South Street. To me this is an essential aspect of the approval of this project. OMB will be another amenity in the area and will complement the Cain Center. I can see this as two anchor tenants and the economic energy between the two on the path. Then you bring in Antiquity and you’ve got a three-legged deal creating a sustainable economic environment in that area.”